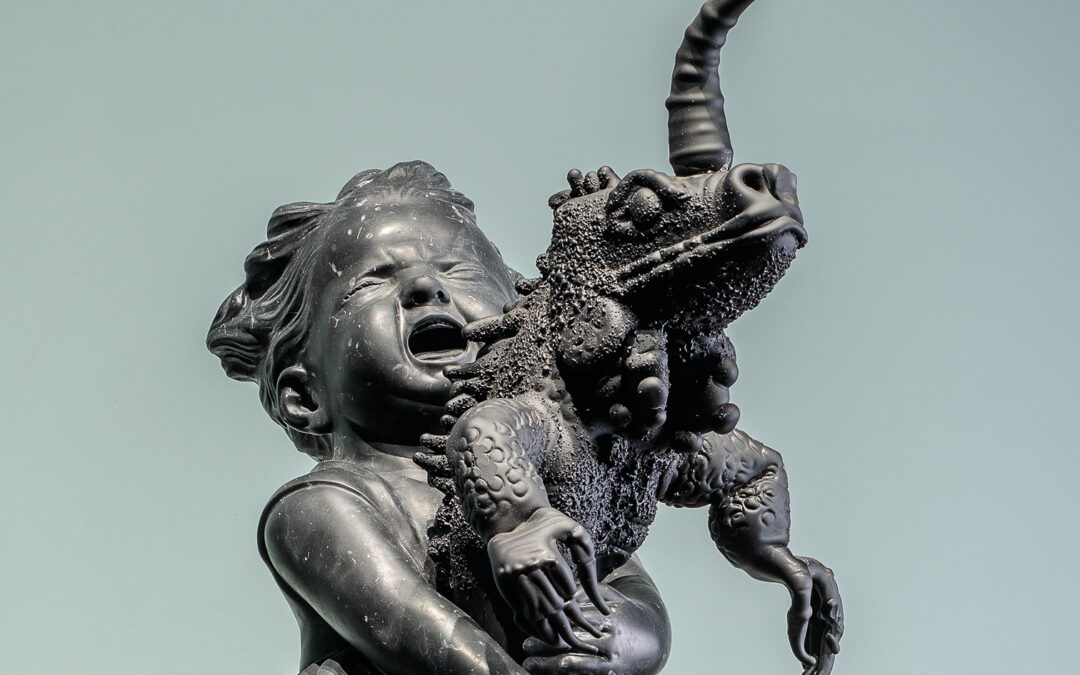 After their successful debut at the Uffizi Gallery in Florence, the thirty fantastical creatures created by the Belgian artist Koen Vanmechelen in striking combinations of Murano glass and Carrara marble return to the setting of their origin: the island of Murano. Vanmechelen’s latest solo exhibition Burning Falls opened on Friday in the presence of the artist. A long-term collaborator with the Studio, Vanmechelen has worked with Adriano Berengo and his glass masters for over twenty years, exploring the unlimited creative potential of the medium for contemporary art. 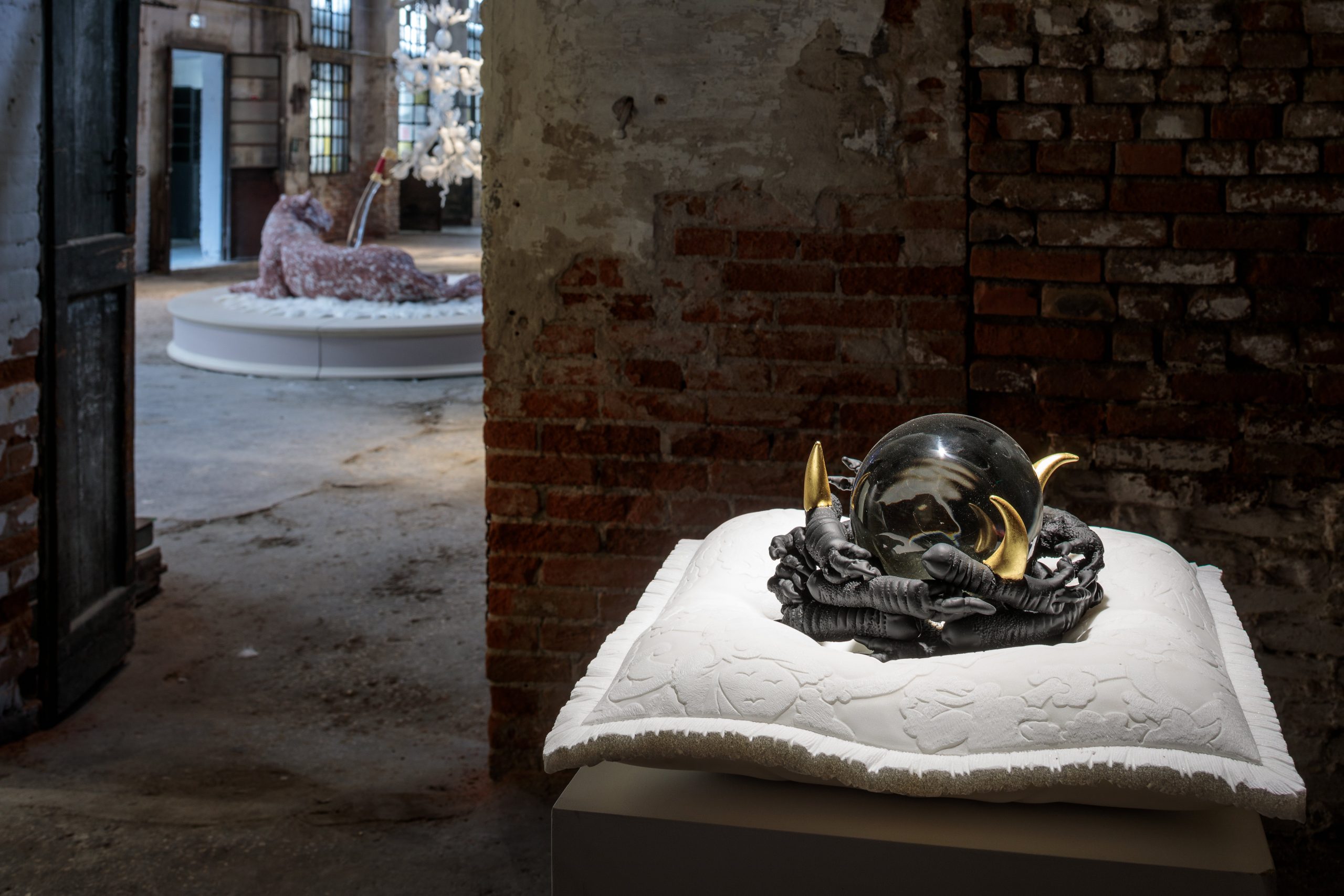 In this most recent series of sculptures the artist goes further, combining glass with another ancient material with a famous history in Italy: marble. Sculpted in Carrara the majestic marble busts provide the perfect base for the Belgian artist to begin his radical explorations of form in glass. Familiar figures, mythical gods and heroes are recast anew, extended and decorated with elaborate glass details, all handblown by the maestros under the expert direction of Vanmechelen. The stern stoicism of the classical world is reinvigorated and reignited through the sculptural additions in glass. In the eye’s of the artist it is a medium that looks forward: “Glass is the material of the future,” he noted, “It is both recyclable and mouldable. And it invites connection and teamwork, merging creativity and craftsmanship.” 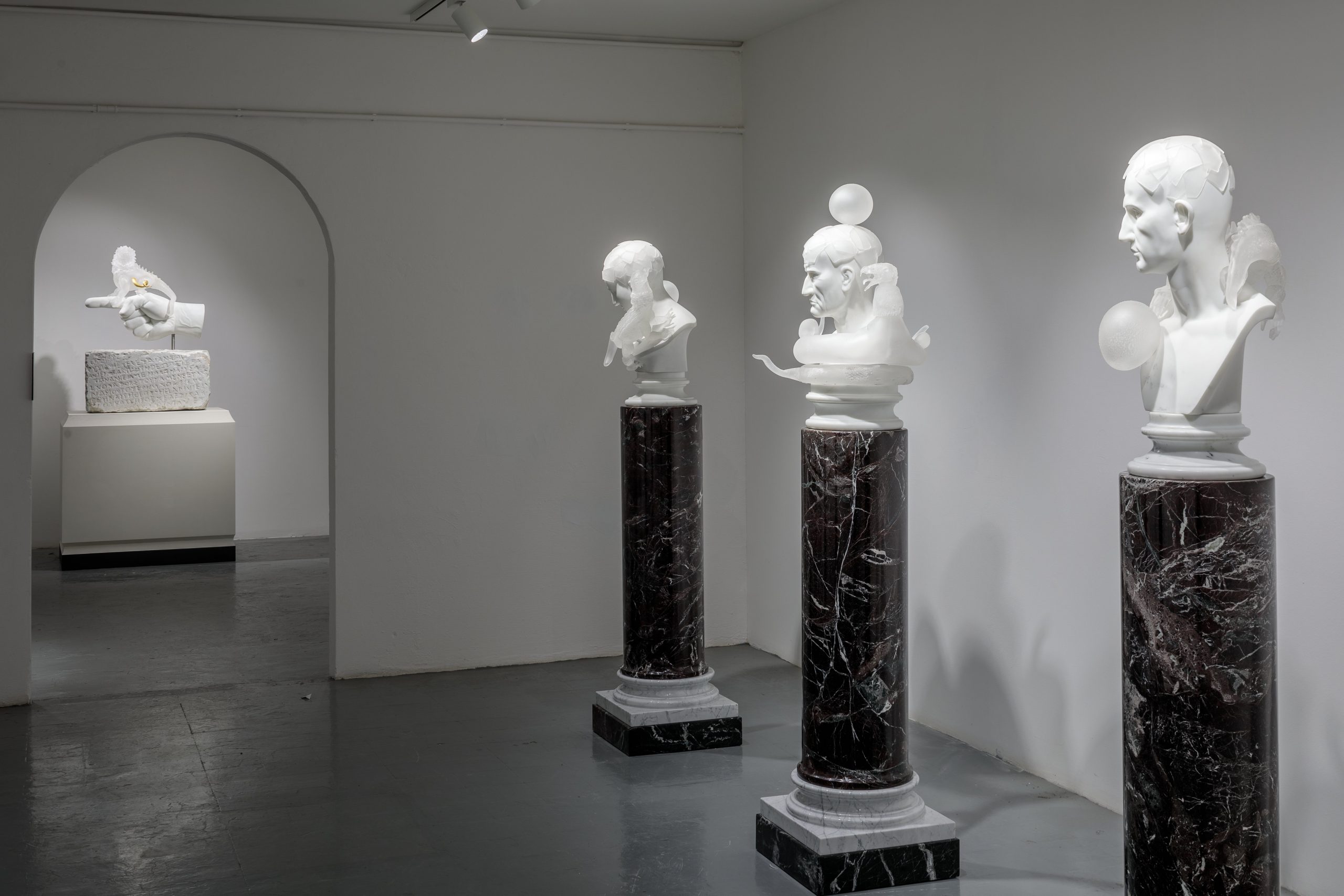 In addition to the Medusas, the red tiger, the serpentine chickens, the horned iguanas and the other mystical animals seen in Florence, several never-before-seen pieces made their public debut, including the captivating Formula Segreta chandeliers: two complex works that reflect on the origin, decay and regeneration of all living things, and are intended as a tribute by the artist to the history of Murano glass.

The figure of Medusa, the gorgon with snakes for hair and whose gaze turned men to stone is reborn under Vanmechelen’s eye. The symbolism of snakes is reinterpreted, transformed for the occasion into monstrous and deformed chickens. The intention is to evoke in the viewer the symbolic value of the unsuspecting creature, the chicken has also always been an important metaphor for the artist because it is an example of the potential for life and the ways in which human beings have been negligent with its unlimited potential. Medusa’s poison was also said to revive the dead, and Vanmechelen draws an astute parallel by noting how chicken eggs are used in modern science as the basis for vaccines and medicines. His Medusa thus becomes a metaphor for humanity itself, imbued with the power to kill as well as the ability to bring new life. 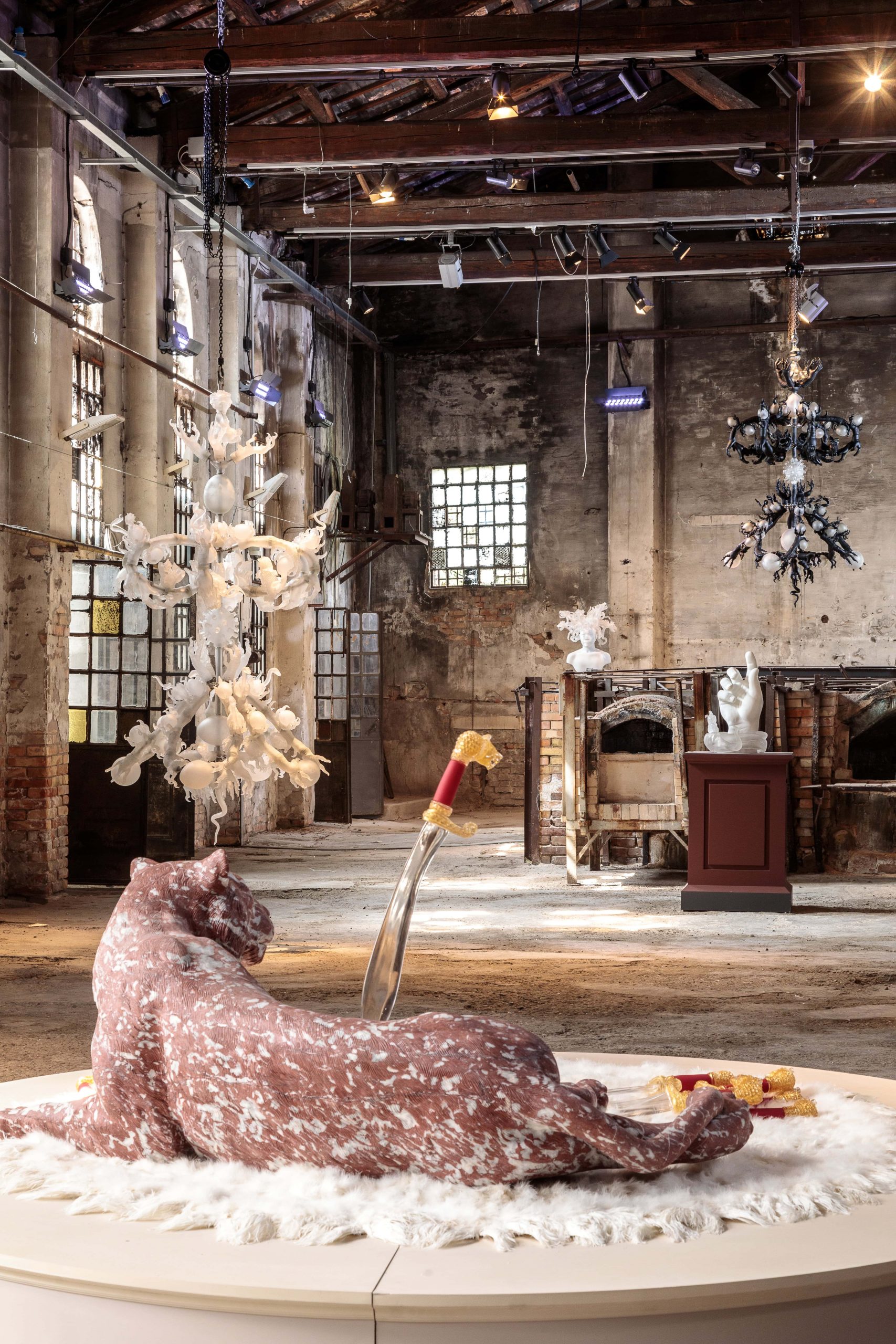 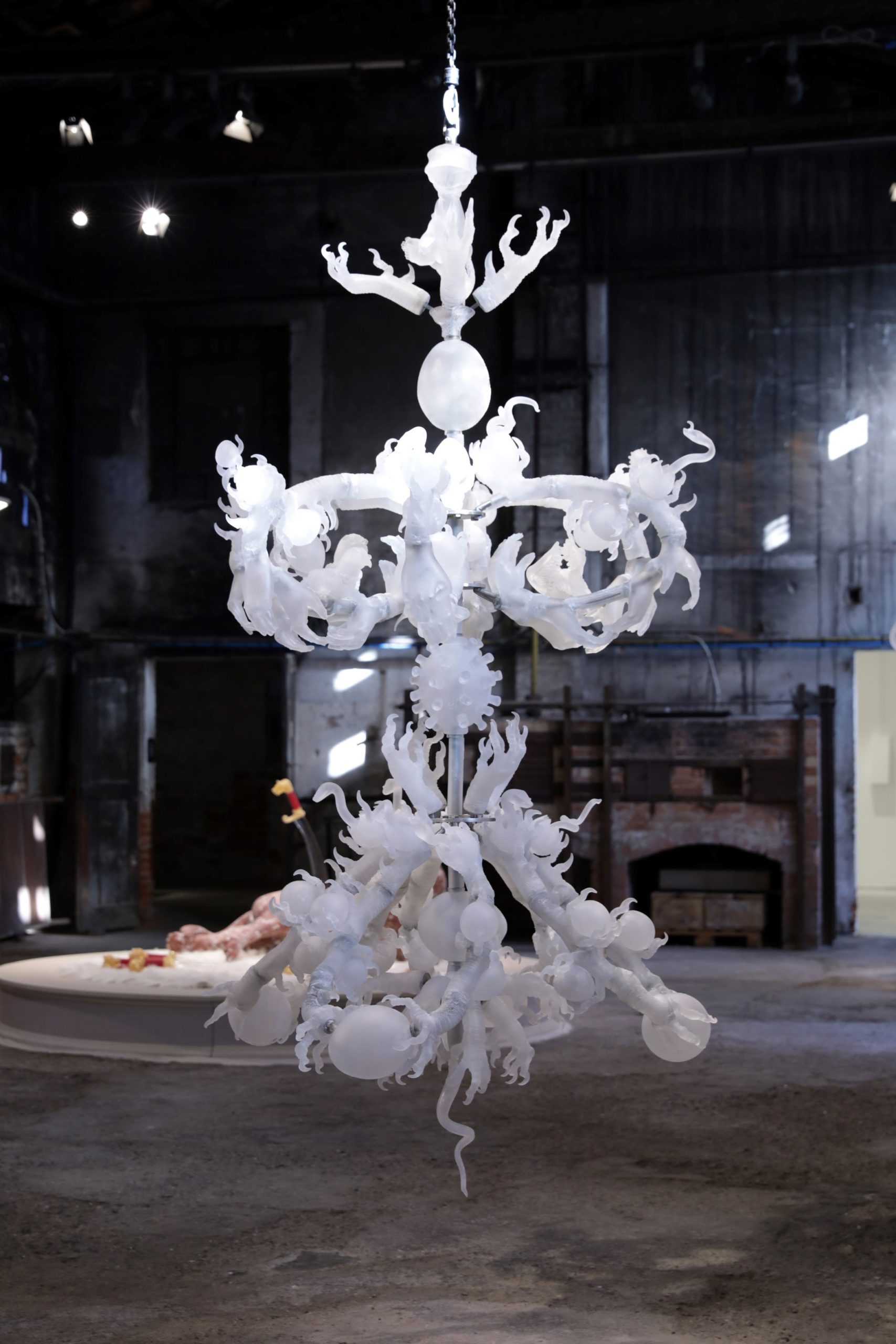 The exhibition features as part of the In Città section of Homo Faber, the major exhibition event dedicated to artistic crafts and international artisans. Burning Falls aligns with the spirit of Homo Faber, whose focus this year is The Living Treasures of Europe and Japan. Crafting a more Human Future, and allows us to celebrate this unique material during the United Nation’s International Year of Glass. 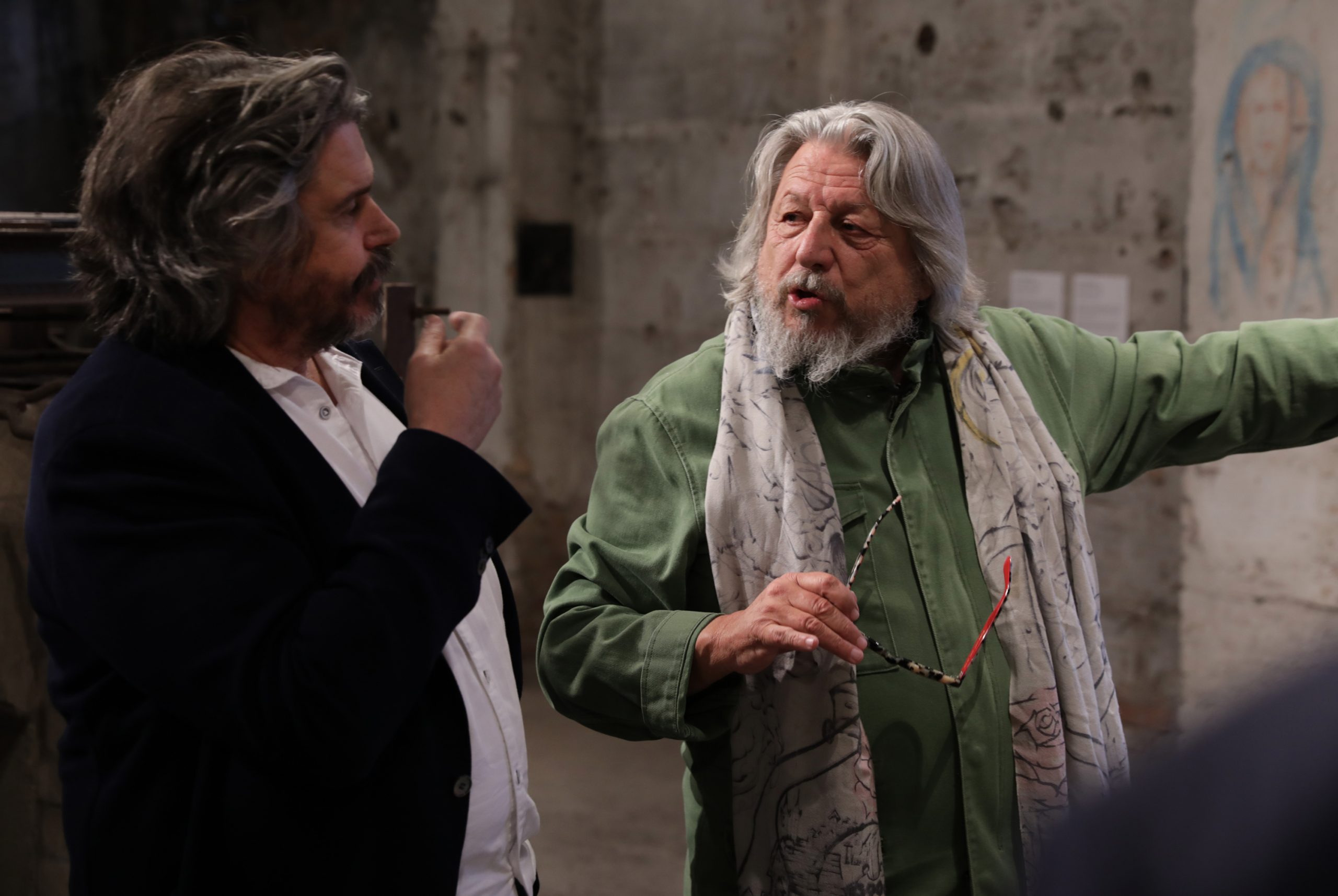 In the artist’s own words at the opening: “We don’t know what we are doing with nature […] [yet] nature knows very well. If Burning Falls can break down the walls that divide us today, it will create a transparency in which we will recognise ourselves in each other.”

The exhibition runs from 8th April to 15th May 2022. For more information click here.