A STATE OF MATTER: MODERN AND CONTEMPORARY GLASS SCULPTURE at the Henry Moore Institute

The United Nations has declared 2022 The Year of Glass, and to celebrate this exciting venture the Henry Moore Institute in Leeds, England, has opened an exhibition exploring the potential of glass as a medium for contemporary art. Titled A State of Matter: Modern and Contemporary Glass Sculpture the exhibition explores the potential for glass as a material for sculpture through its three states of matter: solid, liquid, and glass. On display in the main galleries of the Institute the audience follow a site-specific pathway through these three states, with an assortment of sculptures gathered together from 1965 to present day. The exhibition features work by several of Berengo Studio’s past collaborators, as well as a very special sculpture that was made in the Studio itself back in 2013. 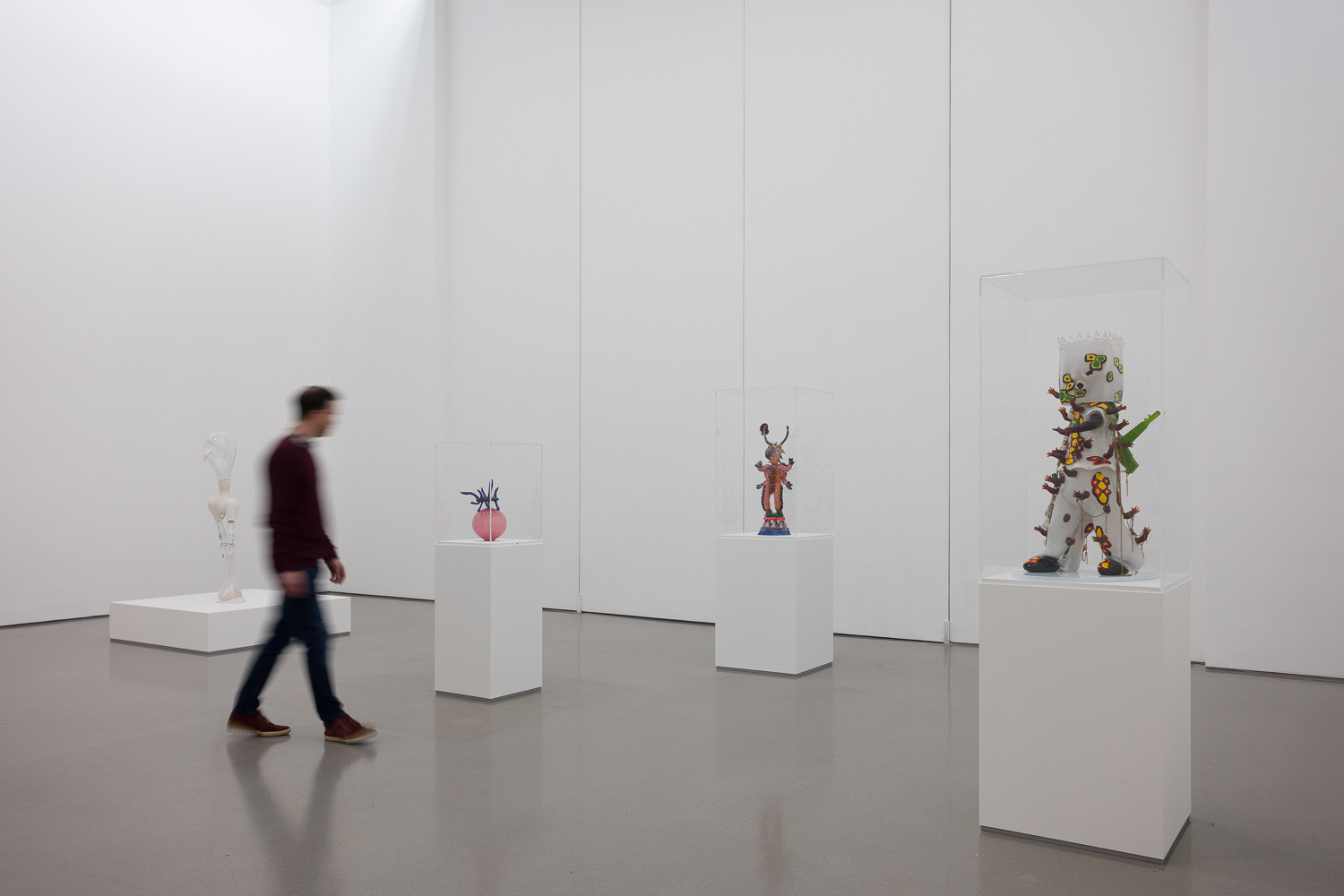 A State of Matter: Modern and Contemporary Glass Sculpture on display at the Henry Moore Institute – Photo credit Rob Harris

The sculpture in question, that has also been used on the promotional materials for the exhibition, is titled Mummy’s Little Soldier and was created by the contemporary artist Hew Locke. The work mixes media but also inspirations, in the artist’s own words: “I have created a voodoo doll, the fragility of the glass suggesting the fragility of real child soldiers, and as a contemporary homage to decorative glass figurines from the 18th century.” Pleasure and pain coalesce in a striking vertical body, with a series of doll-like hands reaching out to the air but restricted by gold chains. An amulet, a totem, the sculpture blurs the boundaries between human and object, an anthropomorphic figure who cannot be identified with ease, except for the large gun that weighs heavily on its back. The weapon adds identity to the figure, a moving mass that represents all the child soldiers who have taken on the burden of war in the past. Glass as a medium adds a poignancy to the piece, a subtle nod to the fragility of life itself and the delicate state these young people are in as they are subjected to the traumas of war, and exposed to the shattering irreversible consequences such conflict can inflict. 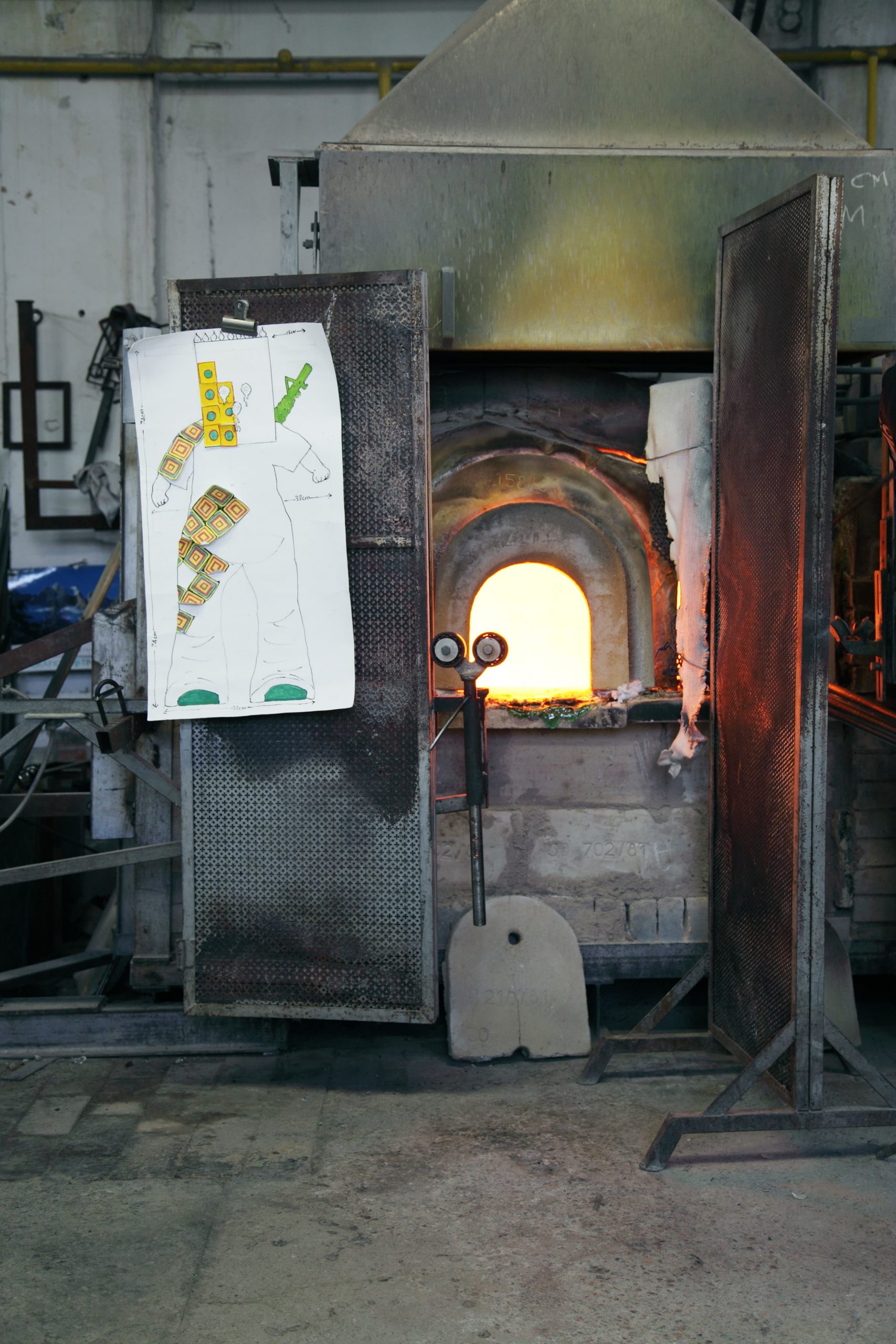 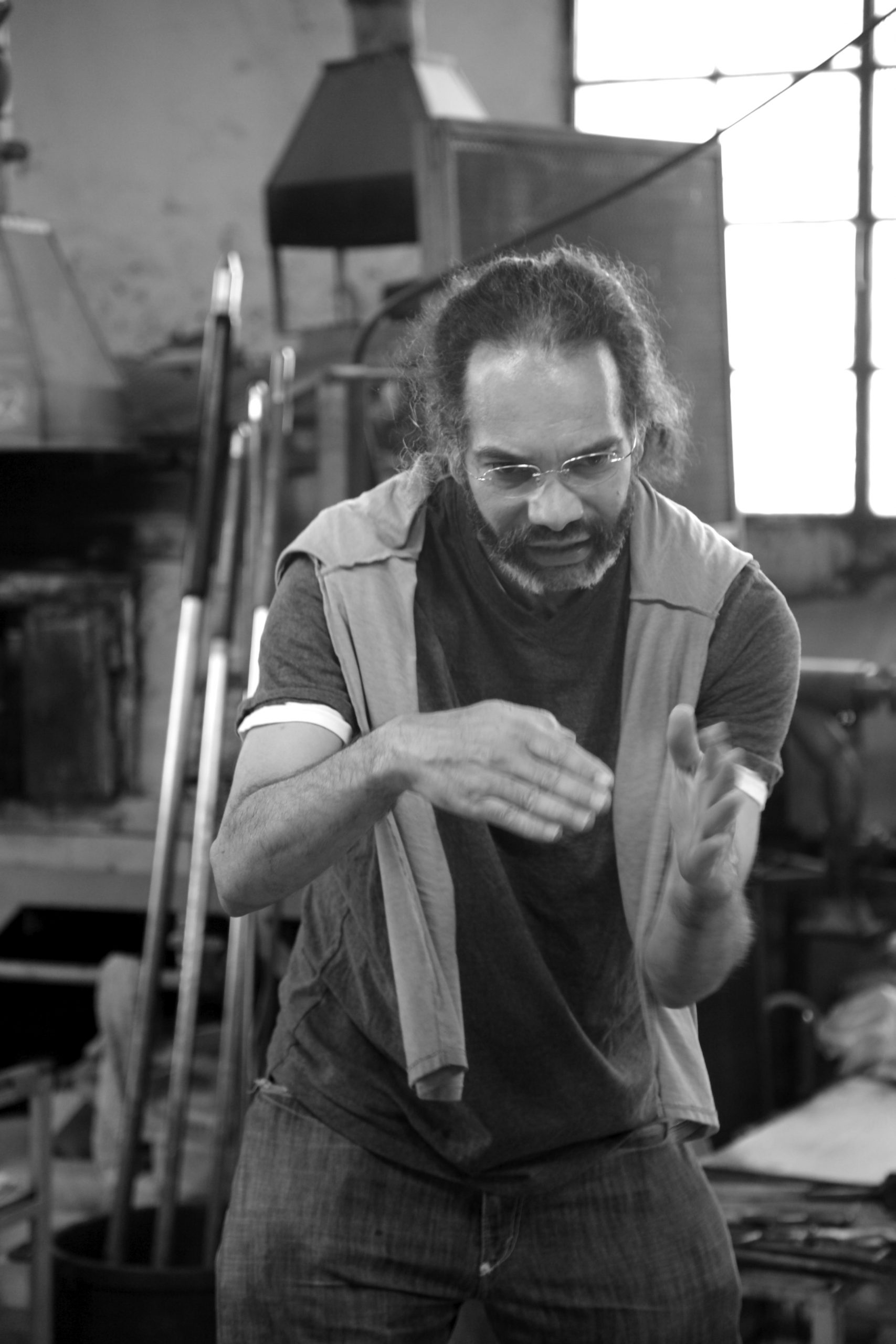 In the words of the Institute: “Glass is a mysterious and wonderful thing. Less a material than a state of matter, the heat of the furnace transforms grains of silica into molten lava, which can be stretched, flattened, moulded, blown or cast. When cooled from its molten state, glass takes on the qualities most readily associated with it, becoming transparent, reflective, fragile and ephemeral. Although a number of sculptors specialise in working with glass, A State of Matter: Modern and Contemporary Glass Sculpture also celebrates the skill of the master glassmakers who work in creative and collaborative partnerships with artists, and who make glass perform the most extraordinary feats.” In this sense the exhibition works well with the mission of Berengo Studio as it pairs glass maestros with contemporary artists to forge unique collaborations. The show eloquently highlights how glass as a medium for art should not merely be confined to those artists who work exclusively in the material. On the contrary it is often those artists who have never worked with glass before that often produce the most interesting works, exploring its potential with fresh eyes. The exhibition brings together works by sixteen contemporary artists and celebrates the diversity of the medium and the imaginative and subversive ways in which it can be used. It’s a show that explores the potential of glass for art, a message Berengo Studio has been practicing through its efforts to bring artists to Murano to experiment in the material for over thirty years. 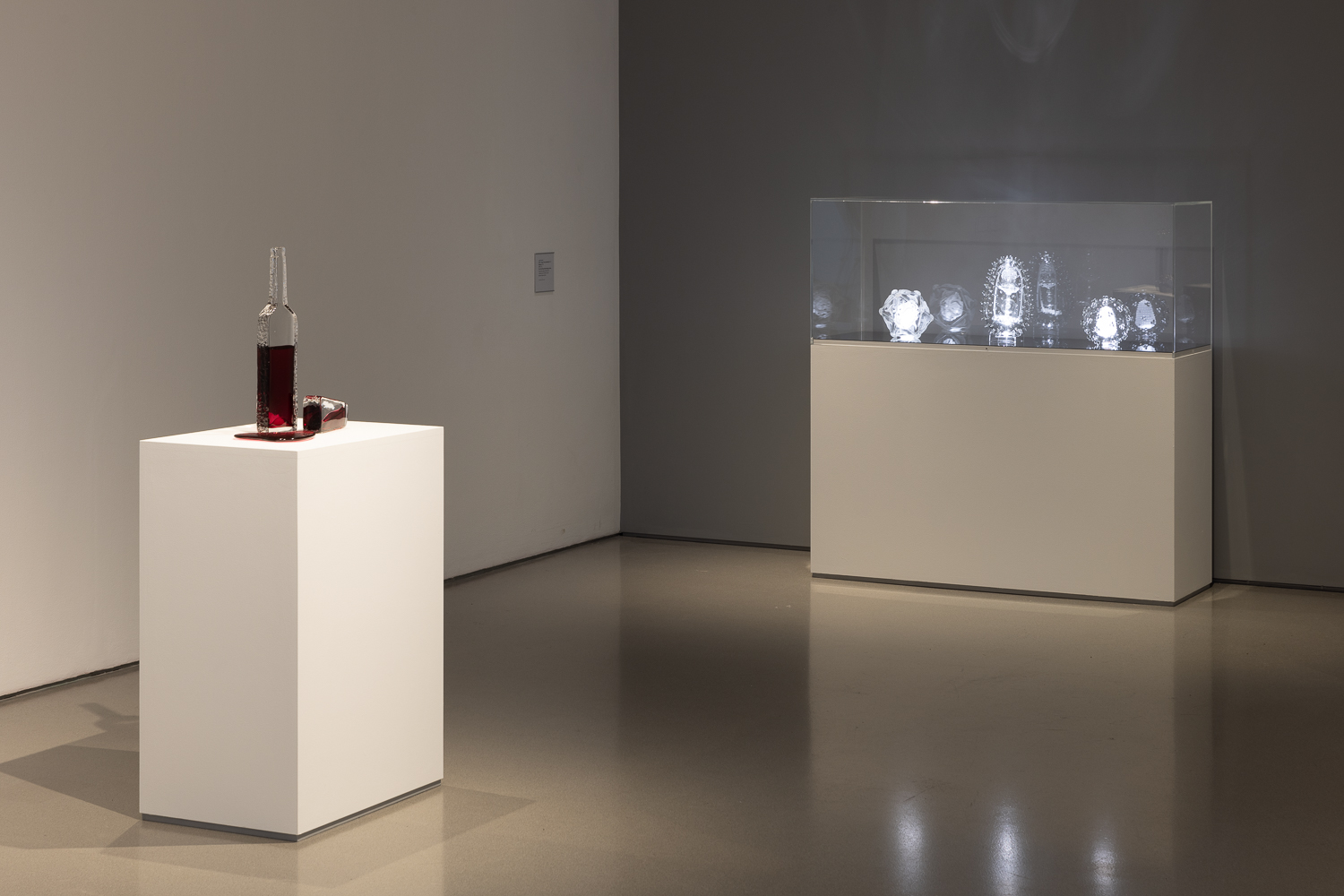 In fact, the exhibition includes a number of artists who have worked in collaboration with Berengo Studio, and several who have exhibited in past editions of the Studio’s exhibition Glasstress. Among these are artists are Luke Jerram, Joseph Kosuth, Silvia Levenson, and Mona Hatoum. In fact Hatoum also collaborated with the Studio back in 2013 along with Locke to produce a sculpture for the exhibition Glasstress White Light / White Heat. The show was originally held in Venice as a collateral event of the 55th edition of the Biennale of Arts, before it travelled to London in collaboration with the London College of Fashion and went on display at The Wallace Collection. 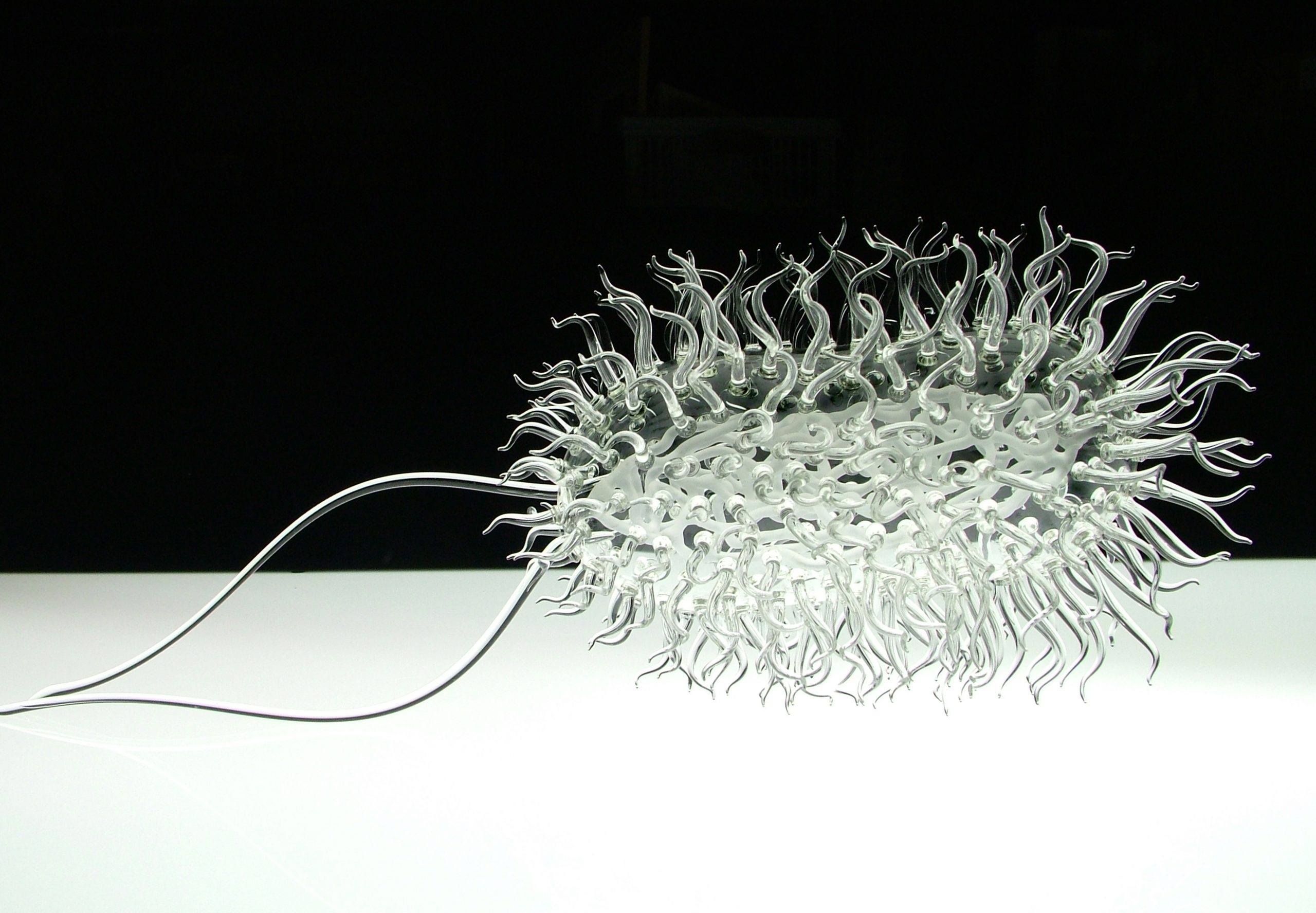 Berengo Studio is delighted to see Locke’s sculpture at the heart of this new exhibition, and honoured that it has helped assist so many of the artists who have been selected to represent glass in all its various states of matter. In the Year of Glass itself, this is certainly an exhibition not to be missed.

A State of Matter: Modern and Contemporary Glass Sculpture runs from 18th February till 5th June 2022. To find out more about the exhibition and book tickets, visit the Henry Moore Institute’s website here.