An interview with Nancy Burson – DNA HAS NO COLOR 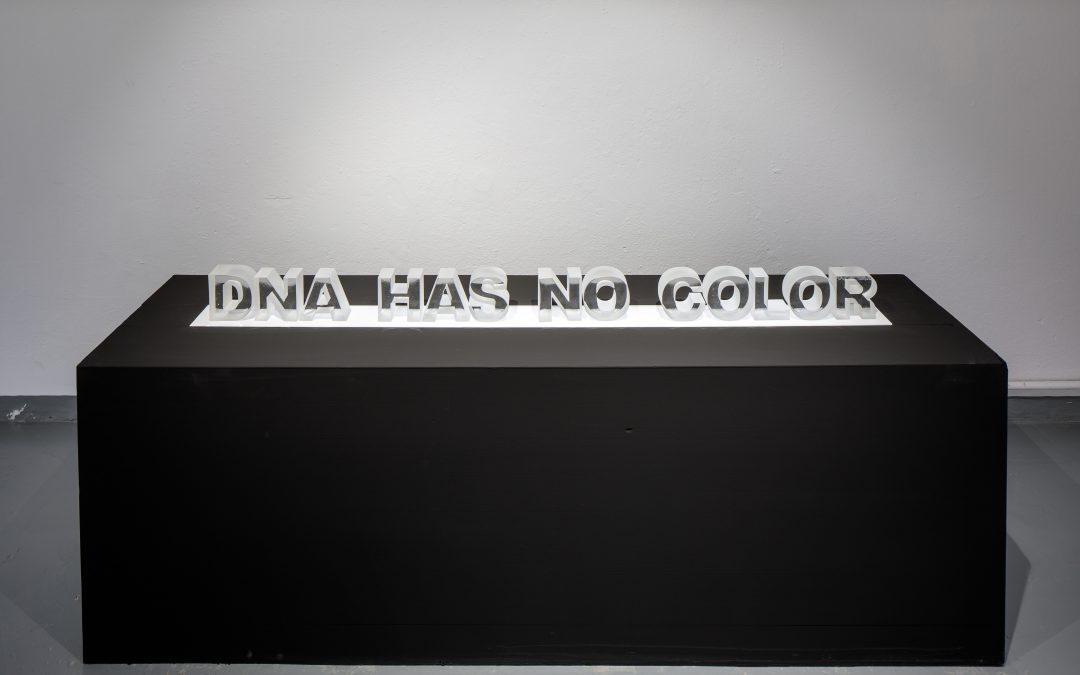 A world-renowned artist and photographer, Nancy Burson may be best known to many for her striking portrait that took the cover of TIME magazine by storm: a morphed image that combined the faces of Trump and Putin. She is the inventor of facial morphing technologies and of the Human Race Machine which uses techniques she invented to show people how they would appear as another race. She’s now taken that original project, which declared THERE’S NO GENE FOR RACE a step further, with a redevelopment called DNA HAS NO COLOR. This new updated statement presents the opportunity to scientifically hammer Burson’s thesis home: it’s a powerful work about the illegitimacy of racism. We sat down with Burson earlier this year to talk about her collaboration with Berengo Studio in the run up to the project’s debut at Firenze Suona Contemporanea in September.

How would you pitch the project to someone who has not come to your work before?

I would say, here’s a new way to say that humans are all one race, the human one!
I did a project in 2000 for the London Millennium Dome for Zaha Hadid, who commissioned me to create a Human Race Machine. It debuted on January 1st, 2000 in London. Then it came to New York through a show called Paradise Now, an exhibition that focused on the mapping of human DNA. I created a billboard on the corner of Canal and Church street that said, THERE’S NO GENE FOR RACE, which featured images of the same woman as five different races. The public art organization, Creative Time, sponsored the project. In those days, there was not nearly as much antagonism between the races as there is today. For me, DNA HAS NO COLOR acts as an update of that original message. It’s a timely reminder that we are all the same beneath our skin.

So how did you come up with the concept? Where did you start?

Well you know, I’m what most people would describe as a medium. I’m clairaudient, so I tend to do what I hear, and I kept hearing the phrase: “DNA has no color”. I checked it out on-line and what I was hearing is the truth: DNA is essentially transparent except for when there are impurities in the samples, and then it tends to be whiter. I double checked it with a couple of my scientist friends and here we are! I also wanted it to be a public art project, but since it was a brand-new idea, I hadn’t yet found a venue for it. Then when I was in Florence in May, a friend of mine had worked with the Berengo Foundation, and when I mentioned there was a sculpture project I wanted to do about DNA, he called Adriano! So here we are!

It is such a timely issue. Were you very reactionary to what was happening in the news or was it a more vernal consensus that you were thinking of?

The malaise surrounding the rise of bigotry is overwhelming in the US right now, and is  even more pronounced in the bigger cities, such as the big democratic regions like New York. It’s devastating to see so many facets of equality and liberal thinking failing all around us. I grew up in the 1960’s and there was so much hope. We grew up protesting against the Vietnam war and played a key role in ending that war. We fought to establish abortion and equal rights for women and then to have all of that suddenly cascade downhill has been profoundly disturbing.

So, as an artist, one does what one can.

When you were thinking of transforming this project from a conceptual idea into glass what were your first thoughts? Was it very daunting or were you excited to work at Berengo?

I was overjoyed to have the opportunity to work with Berengo. I had originally assumed it would have to be made in Plexi-glass and I hadn’t thought of using glass. I was thinking of outdoors. I was thinking about something that would be sturdy, and I was thinking about something bigger. However, glass and I are a perfect match! I’ve had a mysterious form of crystalline glass coming through my feet for almost eleven years. The bigger ones are about a quarter of an inch and they collect in my socks. Scientists from all over the world have studied them and there are other “materials of unknown origin” that I’ve received and there’s a whole story behind the story. I’ve also just finished writing a book about it. Everything is still under investigation, including the mysterious form of glass. Until now, I’ve been very quiet about these aspects of my life, but have fully documented both the images and the various scientific analyses of the materials through my art.

That sounds so eerily perfect that you have such a concrete connection, that’s a really palpable link to glass as a material, it feels like fate that you ended up working in glass.

As far as I’m concerned, everything is fate or what I call destiny. We never know what the future holds for us. All we can do is keep following the breadcrumbs along the path. We never know what is meant to be until whatever is destined occurs. I hadn’t thought about working in glass but of course, it makes perfect sense!

You’re engaging with race and it’s such a delicate issue right now, especially with the rise of the movement of Black Lives Matter.  The idea that you’re saying “DNA has no color” were you ever afraid that it would align you with the arguments of “I don’t see colour” and the “all lives matter” movements? Or do you see it as something completely separate?

I see it as scientific truth. There are the people who see humankind as separate from each other, and then there are the majority of people who are accepting of the fact that we are all connected. We’re all part of one human family, but some of us just aren’t there yet. I like to see it from a positive view. Some people don’t understand the concept of global unity right now, but that doesn’t mean they never will.

Yes, I think the idea of being open and that people can learn and grow to understand things is crucial, especially in that kind of area.

I agree, and just because we’ve swung to the right doesn’t mean it’s going to last forever, or that humanity won’t ever align in that understanding that we’re all one. There have been artists who have dealt with the fact that our blood is all the same color, and that’s been a profound message. However, now science enables us to see down to the level of our DNA, which is colorless.

Yes and that linking between science and art, I love that because I think people forget how historically science and art have always been intertwined and it’s only really in our modern world that they’re seen as these separate entities and people think of art as something completely separate from science.  Could you tell us about the process of going back and making people see the relation between science and art in a new light? What was it like working with those two supposedly disparate categories and combining them again?

Art, science, and I go way back to my childhood. My mother was a lab technician, but to me she was a scientist. I remember visiting labs with my mother, and I have memorable experiences of doing fake experiments with real blood. Laboratories were something exciting to be explored! I also remember focusing on the rays of light coming through my window and examining them very closely. Somehow, I had a conscious understanding that there was something in there other than dust. My question was, what is all that stuff? In the mid-1990’s, I studied how energy works in healing and how it moves around and through our bodies. I even photographed energy in some of my images of hands-on healers. But how is that energy directed, and what influences it? That led me to study some aspects of physics, and particles like Higgs Boson, and Dark Matter. Evidence of both are essentially still missing, yet physicists agree they make up 85% of the Universe. Where is it?

That feels so specific to the art you’re making now too. The way that you’re making DNA, this incredibly important but invisible thing, visible. You’re creating a sculpture to do with something that is never usually seen, you’re bringing something into the public consciousness: you’re making people see things that are supposedly un-seeable.

That’s exactly what my work has been about from the very beginning!